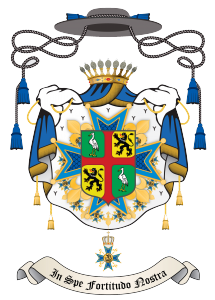 Speaking in 1982, Cardinal Agostino Casaroli defined the ideal of a chivalric society in the following words:

“To fight against evil, to support what is good, to defend the weak and oppressed against injustice; to tame the arrogance of the powerful; courage, self-denial and magnanimity; heroism through self-sacrifice, to the death if needs be! – That is the figure of chivalry, in the original sense of the word.”

It is with these words that we, the Knights and Ladies of St. George of Burgundy, seek to keep the face of chivalry alive!

Chivalry’s original purpose concerned the maintaining of equilibrium between the several different social classes that existed in the Middle Ages. The ideals that became manifest as the original chivalric code was developed were those of fairness, discipline and conducting oneself in a manner that could be considered ‘proper.’ It is through these ideals that the growing social class of knights established their aims:

These miles Christianus (Soldiers of Christ) protected the Church and her interests, fought against heathens, and stood by the weak, widows and orphans.

And so, the knights of the Middle Ages did not only serve as a military backbone, nor did they merely support the power of the monarchs they served. Rather, their primary mission was to advocate a social conscience of a global order which, legitimised through Christ’s Majesty, was wholeheartedly committed to the spirit of charity.

As a result, this image of chivalry became associated with acts of mercy, which indeed can be seen as a consequence of charitable love.

But what meaning can this notion of knighthood, and the values attached to it, have for us today? Are today’s ecclesiastical knightly orders merely a later attempt to bring these older ideals to life?

In his epistle to the Ephesians, the Apostle Paul calls us to fight for Christ and His Good News. Writing from prison, he says:

„Be strong in the Lord in in the power of His might. Put on the armour of God, that you may be able to stand against the wiles of the devil. Take up the whole armour of God, gird your waist with truth, put on the breastplate of righteousness, dress your feet with the readiness to fight for the Gospel of Peace. Above all, take the shield of faith! Take the helmet of salvation and the sword of the Spirit, which is the Word of God. Pray always in the Spirit.“ (cf. Ephesians, 6:10-20)

These are powerful words from the Apostle which retain their value even in the present day.

The postmodern age is not without its challenges and its problems. Commitment to justice and liberty, to truth and to the faith, has become a true necessity. Indeed, the defence of these values from a Christian perspective is a challenge for those who would devote themselves to promoting these ideals of chivalry.

Our chivalric society seeks to make a contribution to these aims, which we achieve through supporting several projects which are active in Christian charity. Again, our emphasis is on reflecting and practicing the Christian faith. As a Catholic confraternity, we stand strong in our support of the challenge of ecumenical work with the Oriental and Orthodox Churches.